I anticipated volatility returning to the financial markets in 2014, so I am not surprised by what happened in January.  The month saw two consecutive days when the Dow Jones Industrial Average declined by 1% or more.  This had happened only once since 2012, while there were 15 instances of two consecutive big down (1% or more) days in 2010 and 2011 (source: Yahoo Finance).

In my opinion, January’s volatility was triggered primarily by signs of slowing growth in China and fears of a financial collapse in emerging market economies, especially currency devaluations in Turkey & Argentina.  While these factors can’t be ignored, they do not appear to be impacting economic growth in the US or in developed markets in Europe and Asia.

Corporations continue to do well. “As of Jan 30, 2014 with 40% of the S&P 500 having reported 4Q earnings, over 72% of earnings reports have beaten consensus. Perhaps most encouraging is that 63% are also beating revenue estimates. Just three quarters ago, only 37% of the companies beat on revenue. Currently accelerating revenue and margin expansion suggest raising 2014 and 2015 EPS projections”. (source: International Strategy & Investment)

The world continues to be flush with cash.  This is due to major Central Banks, especially the US, ECB and Japan, continuing monetary stimulus and keeping interest rates low.  Corporations have refinanced debt thereby improving their balance sheets.  Consumers have done the same and have seen their net worth increase due to rising home values and gains in the financial markets.  Even states are doing better financially  –  an example from the Jan 29 (USA Today) – State of the States: What to do with their surpluses? Andrew Cuomo — “We have gone from a $10b deficit to a $2b surplus in just 3 short years.”

The first week of February will be important to watch.  Janet Yellen will be sworn in as the new Chairwoman of the Federal Reserve and the January jobs report is due on Friday February 7, 2014. Also, February is generally not a strong month for equities as the following chart shows. 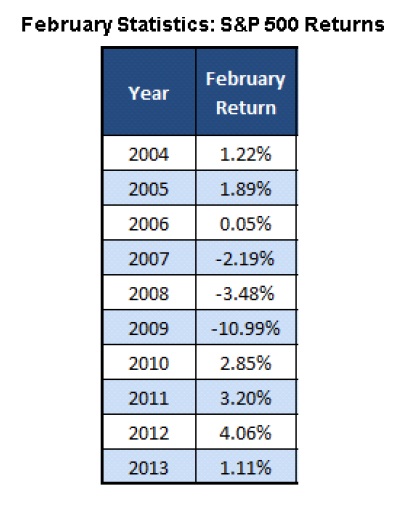 You should be starting to prepare for filing your 2013 income tax returns.  I suggest you gather all relevant documentation including, but not limited to, year-end statements for all financial accounts,  W-2s, 1099s, copy of 2012 tax returns, and receipts for charitable donations and business-related expenses.  Most 1099s will be mailed by February 14, 2014 but beware of adjustments or delayed 1099s if you own certain types of investments like mutual funds, REITs or MLPs. These 1099s may not be issued or finalized until sometime in March.  If lowering your taxes is a priority, let me know so we can start a conversation now with your tax preparer.

I hope you find this report informative.  Please call me with any questions or concerns.  Feel free to pass it along to anyone who you feel would benefit from this information.