“What is money? Money is the most successful story ever told, because it is the only story everyone believes. Money is not an objective reality, it has no objective value.  Take this green piece of paper, the dollar bill – you cannot eat it or wear it but then come along these master storytellers and they tell us this green piece of paper is actually worth 10 bananas and if I believe it and you believe it and everybody believes it, it actually works ”  Yuval Noah Harari  as excerpted from TED talk on What explains the rise of humans.

A rather interesting concept.  I view money as a tool, as a means to an end.  It’s significance comes for providing the means for you to enjoy the things that are most important to you, be that family, career, hobbies, recreation, etc.

Ok enough deep thinking. Let’s get back to reality.

July was a busy month around the world.  The U.S and Cuba agreed to reopen embassies in each country’s capital city, U.S. Women’s soccer team won the World Cup over Japan,  Greece managed to avoid a complete debt default, the Chinese stock market (Shanghai Composite) fell some 32% over 18 trading days, and a deal was signed between 6 nations and Iran on nuclear sanctions.

Domestically,  the end of July saw the Federal Reserve issue a more upbeat report on the U.S. economy and the Bureau of Economic Analysis reported that the initial reading of Gross Domestic Product (GDP) grew by 2.3% annually in the 2nd quarter of 2015 and revised the 1st quarter from a negative 0.2% to a positive 0.6%.

The situation in Greece and China created some heightened volatility in financial markets early in the month but as of 7/30/15 the equity market (basis S&P 500) is just 2% below the high for the year. The fixed income market (basis US 10yr Treasury) saw interest rates increase to 2.47% then fall back to 2.29%.

My outlook is that US equities will continue to trend higher, albeit at a slower pace (see chart below courtesy of RiverFront Investment Group).  A moderate pullback, say 5% – 10%, would not surprise me and would be a buying opportunity in my opinion. Internationally, I favor developed Europe (Germany, UK) and Japan.  I am worried about China, but more so about the slowing growth in their economy than about the volatility in their stock market. 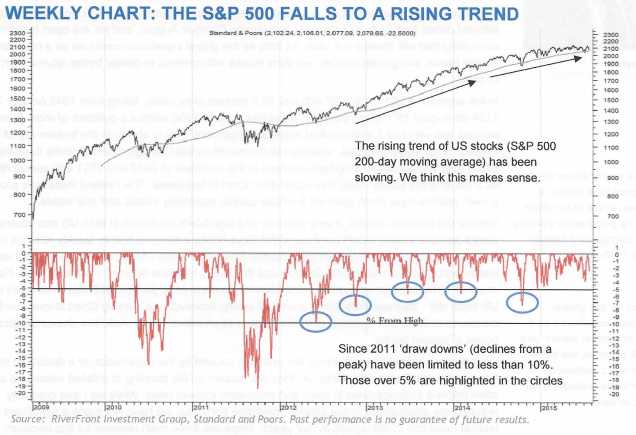 I expect the Federal Reserve to increase short-term interest rates in September.  This should have a minimal impact on fixed income investments and the financial markets in general as the increase will be small (likely 0.25%) and has been well telegraphed.

Please let me know if you have any questions or concerns.