2015 was a difficult year across the investment world as oil prices continued to fall, the U.S. dollar continued to strengthen, slowing growth in China hurt global economic growth, and increasing terrorist activity around the world created a level of uncertainty the financial markets dislike.  For the year, the U.S. stock market (S&P500) finished down 0.73%, while interest rates (U.S. 10yr Treasury) finished at 2.27%, up from 2.17% at the end of 2014. (source: Yahoo Finance) While the net change was very small, it was an extremely volatile year in equities with the most +/- 1% daily moves since 2011 and a record number of 24 times the S&P500 crossed between positive and negative during the year. (source: Bespoke Investments)

Globally, economic growth (as measured by Gross Domestic Product or GDP) has been slower when compared with historical recoveries from recessions.  The chart below, courtesy for BlackRock, shows that all major economies have lagged the historical trend.  This is somewhat due to the depth of the global recession caused by the 2008-2009 financial crisis, which was deeper than the average recession since 1960.  On the positive side, the slope of GDP growth in U.S. and Eurozone, while below trend,  is now tracking historical recoveries. 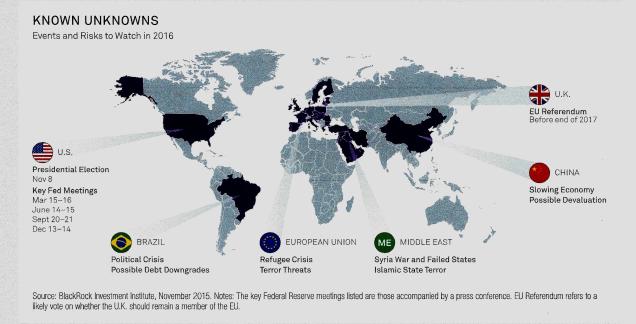 In summary, I remain cautiously optimistic on global economic growth and general financial conditions for 2016. I continually monitor events and conditions and will let you know if any changes are warranted to our investment approach.

I hope you find this report useful.  Please pass it on to anyone who you feel would benefit from the information.

Please consider the charges, risks, expenses and investment objectives carefully before investing. Please see a prospectus containing this and other information. Read it carefully before you invest or send money.