Investing is an inherently risky business.  As there is no way to accurately predict any particular outcome, my approach is to deal in the probabilities of various potential outcomes.  For example, you have likely been hearing more on the news that the U.S. economy is surely headed for a recession.  While recent economic data has softened, I still don’t see any eminent signs of recession.  The consumer, who accounts for 70% of the economy, is in decent shape (interest rates are low; job market remains strong; salaries are finally rising; disposable income is higher due to lower gas prices).  The offset is the industrial sector, specifically the oil patch, which is seeing significant contraction due to oil prices.  I also factor anecdotal data into my process.  It has been said that when everyone is asking the same question, it is usually the wrong question, therefore all this noise about recession may be the wrong question. So right now I put the probability of a recession in the U.S. at 35% but rising slightly. 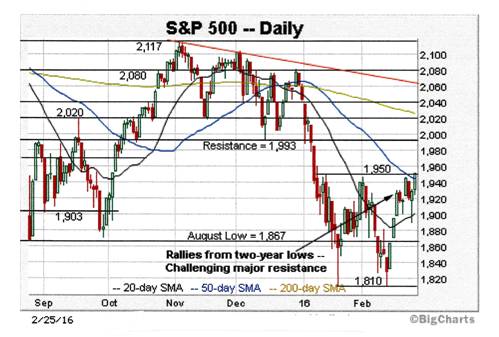 This coming week should provide clarity.  The February employment report is due Friday March 4th.  Here is an interesting statistic (courtesy of Raymond James & Assoc)

Early March tends to provide the bulls their best historical chance at a rally. Here are the annualized returns for the first five days of March since 1950 on the S&P 500:

March is Women’s History Month.  Please says thanks to all the important women in your life.

March 23rd                  Purim begins – holiday which commemorates the Jewish people being saved from extermination in Persia.

I hope you find this report informative.  Please share it with anyone who you feel could benefit from the information.