I was in the camp of most market watchers that 2017 was going to be a wild, volatile ride with the Trump administration and Republicans taking control of Congress, the Federal Reserve raising interest rates, and Russian/China flexing their muscles militarily.  So, what happened? We got the lowest volatility year on record and stocks (the S&P 500) never fell more than 3% at any point during the year.

Clearly my crystal ball is cloudy, but I am grateful that my generally optimistic outlook during 2017 led me to adjust client portfolios along the way to allow them to participate in much of the positive outcome.

For my 2018 outlook I am taking a different approach.  Rather than forecasting what stocks and interest rates may do during 2018, my process is to analyze the current conditions to identify the dominant trends in place, and then adjust accordingly throughout the year as those trends change.  Today’s trends will certainly change throughout the year. That’s one reason I write an Outlook every month, instead of just once per year.

So what are the current conditions and major trends in place as we enter 2018?

National Bureau of Economic Research uses these 4 indicators most heavily when looking at the US economy.  Clearly all are in solid uptrends. 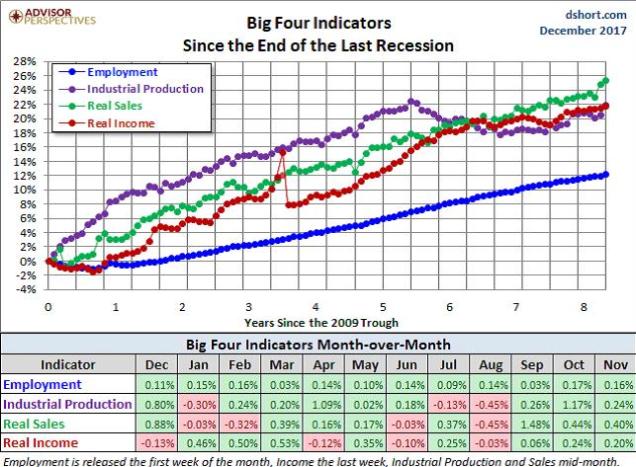 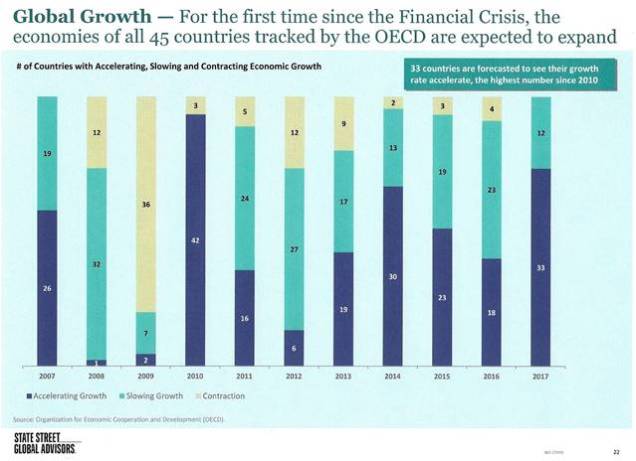 Overall, I expect that economic growth will continue both here and abroad, which should continue to support the bull market in stocks for 2018.  I expect stocks to do better than bonds. However, I do not expect the ride to be quite as smooth as it was in 2017.   I will continue to monitor current conditions and trends and adjust your portfolio accordingly.

I hope this information is helpful.  Please share it with family, friends, and colleagues.