The current state of affairs brought this quote to mind for me.  In this case our 2 cities are the economy and the financial markets.  The financial markets are behaving as if it was “the best of times” and the “age of foolishness” while the economy is looking more like we are moving towards worse times and a need for more wisdom.

The S&P 500 closed out June 2019 with the best first half of a year in over a decade, and less than 1% below a new all-time high.  All 11 broad industry sectors were positive YTD.  The best of times indeed.  The “Dumb Money” Confidence index just crossed into the red zone.  Notice what happens to the S&P500 (SPX) when this index reaches these levels.  Clearly some foolishness going on.

Conversely, the US economy closed out June with some negative trends emerging in economic data.  Leading Economic Indicators, published by the Economic Cycle Research Institute (ECRI) has rolled over and is at a level not seen since 2011. 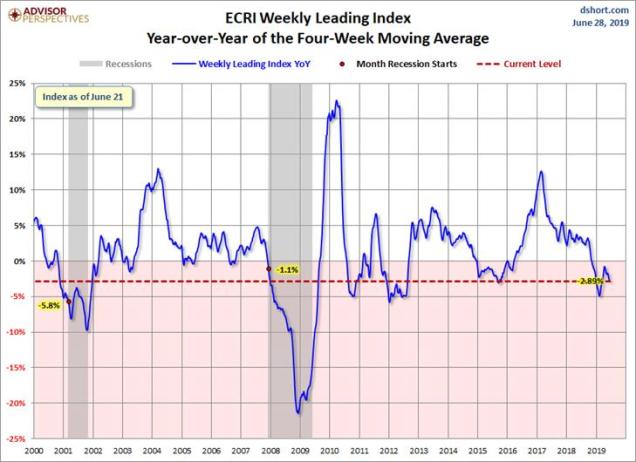 The Conference Board’s consumer confidence index declined in June to its lowest point in nearly two years. The US economy remains the envy of the world but some cracks are starting to show. Certainly not the “worst of times” but clearly a trend that requires some “wisdom”

So what are we watching going forward:

In summary, our outlook going forward is one of caution but not defensive. I prefer to not try to chase gains at the expense of suffering losses if the stock market wakes up to what the economy is saying.  We continue to focus on well diversified portfolios with good risk controls.

Please call us if you have any questions.

Feel free to pass this note along to family, friends, and colleagues as you see fit.

P.S. Thank you for your referrals. They are making a big difference in my practice. Feel free to share my name with your friends on Facebook or LinkedIn.

I want to extend a special thanks to clients & colleagues who have recently referred us to family and friends:

July 30th              International Friendship Day is a day designed to foster friendships and bridge the gaps between race, color, religion

Please consider the charges, risks, expenses and investment objectives carefully before investing. Please see a prospectus containing this and other information. Read it carefully before you invest or send money.